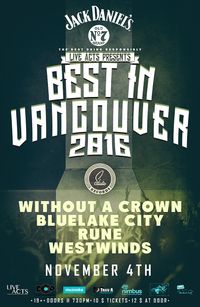 2) One song recorded and mixed at Nimbus School Of Recording & Media. -Record a Nimbus Live Session, which is 2-3 songs recorded live off the floor in the Nimbus studio,captured by Nimbus Video production students, and promoted on thier YouTube channel. -Live Photography Package by Trav A Photography.

3) Song Recorded and mixed by Danny Craig Producer and Musician from the band Default. -Live Photography package by Trav A photography.